Cost in Use - Performance or Price?

Can you spend less money and get a better product? Yes, you absolutely can – and if you don’t believe us, keep reading. In about 4 minutes, you’ll see why.

In this piece, we’re focussing on cost in use, which is the idea that the value of an item should be measured by its performance rather than its price. We’ll explain why certain safety footwear brands are more expensive than others, and most importantly how investing initially can lead to a healthier looking bank balance only a few months down the line. 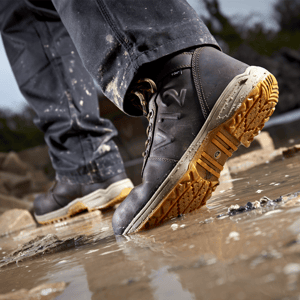 After all, buying a pair of safety shoes isn't like buying a sandwich. The sandwich will have one use, whereas we require multiple uses of our safety boots to keep our feet protected and comfortable over time. But so often, we want the best of both worlds.

We know that if we want a product to work for us, we have to spend a certain amount of money, but that little voice in our head telling us to save money often pipes up. But if you think you’ve bought a cheaper safety boot, it’s only cheaper for a matter of weeks.

To explain how, a good place to start is working out the difference between cost and value.

Let’s imagine there are 2 safety boots on the shelf at the local builders' merchants. One is £30 and the other is £75. This is the cost. Now, the temptation for many will be to buy the one that puts a small rather than large dent in their bank balance. But the first boot is £30 pounds for a reason. The safety specification, the quality of material and components and the levels of comfort will be of a significantly lower standard than the pair that cost £75. (more on what goes into a well-constructed safety boot later)

And because of this, if someone wearing the £30 pair works in an industry where their boots take a major daily hammering, it’s likely that they will need to replace them multiple times a year. In fact, in a survey from the University of Bath in 2019 of over 500 people working in safety-critical industries, over 93% of respondents stated that they wear their safety boots for 8 or more hours a day. (see below)

So, if the cheaper £30 boots need replacing 3 times a year, their actual cost per year is £90. So not only do these less expensive boots stop seeming good value for money, but the £75 pair which are still going strong after 12 months are now actually cheaper in the long run. They cost more initially, but eventually they had greater value.

And while paying more for better performance over time benefits the buyer in most purchasing situations, it’s arguably most critical with PPE, because we don’t just want these products to last, we need them to ensure our safety.

And we see a consistent link between cost and performance within testing. Time and time again, the higher priced boots perform extremely well under testing, whereas cheaper boots’ pass rates are less consistent.

Further proof of this can be seen in another statistic from the University of Bath survey. Of the 500 respondents, over 58% said that they need to replace their safety boots at least once every 3 -12 months.

No coincidence then that the survey showed that almost 50% of people paid less than £50 for their safety footwear:

These two pieces of data show us then that comparatively cheaper footwear very rarely gives the wearer good value, as they need replacing so frequently.

OTHER TYPES OF VALUE

It’s a good feeling to know that investing more in a product will save you money over time, but money isn’t the only way to benefit...

Poor quality safety footwear leads to poor levels of comfort. And not only can this affect productivity and lead to short-term discomfort, but it can also cause long term musculoskeletal issues. On the other hand, a good value safety boot will keep on giving you the benefit of comfort.

To achieve a low price in a safety boot, manufacturers will often have to take something out of the safety spec or cut corners in production - neither of which are safe or acceptable when the wearer will be working around hazards. On the other hand, paying a higher cost for a safety boot means benefiting from higher levels of protection.

What goes into a well-constructed safety boot?

A well-constructed safety boot will not – and should not – be a low-cost item. It will be a higher price because it should include:
There is also a huge range of safety specifications a boot can house, and because each one performs a specialist function that must be produced and pass specific testing, each one brings its own level of cost. A boot with metatarsal protection, impact absorbing ankle cushioning and a waterproof membrane will have a much higher cost than a boot with just a steel toecap.

Brands that produce good quality products garner a reputation, and there’s a definite value here, particularly for wearers building their own brand. So wearing safety footwear from a brand renowned for trusted, high-quality goods can reflect very positively on the wearer and the safety values they hold.

The quality and value of V12’s safety footwear have helped many wearers, companies and councils to address their safety footwear problems and make considerable savings over time. Just one example of this is when we worked with a large Scottish council to help them with a safety boot solution which brought them outstanding results as well as a big financial gain.

This council provided waste collection services to over 175,000 people who walk miles every day in unpredictable conditions while operating heavy machinery. The lower-budget boots they’d been using weren’t performing adequately: they were wearing out too quickly and being replaced too often.

They came to V12 to find safety boots that would provide the protection and comfort their waste collection workers needed, but would also last longer and wear less. After a work audit, we recommended the V1215.01 Thunder.

45% fewer boot purchases were required than in previous years and a 50% saving was made on boot purchases compared to 2017, prompting the council to include more V12 boots in other services areas, showing that a high cost product is a high value product.

WHAT'S RIGHT FOR YOU: WEIGHING UP THE PROS AND CONS

It's easy to say that stumping up more cash is the only way to properly protect yourself, but we understand that depending on your financial situation or stage in your career, this isn’t always immediately possible. So here’s a quick run-down of the pros and cons of the lower and higher cost buys. Afterall, we’re here to advise, but at the end of the day - it’s your decision!

How do I Protect a Customer's Floor When Moving Through their House?

What is the Difference Between the Materials you Use in your Uppers?

Why do I Have to Pay VAT on Some Safety Footwear and Not Others?