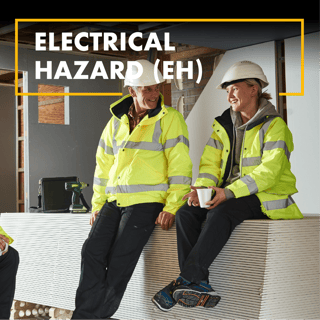 Electrical hazard (EH) rated safety boots are ISOLATING safety boots. This means that they provide a secondary source of protection for you from electric shocks or electrocution.

The idea behind these EH rated safety boots is pretty simple. The entire surface of the boot is made from non-conductive materials and as a result, no electrical charge will pass through the body, because you are essentially fully isolated from the ground.

EH rated safety boots have an Electrical Hazard (EH) rating on them, meaning they have been tested by the American Society for Testing and Materials (ASTM) for their ability to protect the wearer from an electrical shock.

Electric contact can occur in many ways and situations including:

IMPORTANT NOTE: In some cases, EH rated safety boots can be affected by certain factors which decrease their potential to keep the wearer safe. The excessive wearing of the soles or exposure to wet conditions or both can reduce the effectiveness of EH boots. EH rated safety boots are usually worn when working in dry areas where the potential for electrocution is at a high risk. Do not wear in wet, hazardous or explosive areas!

EH SAFETY BOOTS ARE DESIGNED TO PROVIDE A SECONDARY SOURCE OF PROTECTION AGAINST SHOCKS FOR THE WEARER. THEY ARE TESTED TO 18,000V AND MUST PROVIDE ELECTRICAL INSULATION FOR ONE MINUTE.

The differences between anti-static and ESD can cause a lot of confusion - and not just when it comes to safety shoes. While one includes the other, it’s incorrect to say the reverse is true. Although both terms refer to contact resistance, there are fundamental differences between the two.

Anti-static footwear prevents a build-up of static electrical charges in the human body by sending these charges to the ground. They are also designed to protect sensitive electrical equipment from damage caused by a static shock, charge or spark. 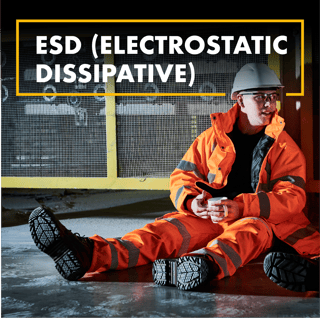 ESD and anti-static safety shoes are used in different type of industries including aerospace and telecommunication to protect sensitive equipment or components from electrostatic discharges.

"I will never wear anything else. An 18 hour day in these is a pleasure, even light enough to making driving easy. Slip into them like my favourite pair of slippers while affording all the safety required of this type of footwear. Big plus is not having to take them off at the airport."

Are you looking for safety boots with one or all of the above safety standards? Check out our award winning safety trainer and hiker range by clicking the button below!

What is the Difference Between the Materials you Use in your Uppers?