Until recently, women working in industries such as construction, civil engineering, manufacturing and rail had to resort to wearing smaller sized men's footwear, as there was very little specific female safety footwear available on the market. But this was - and for many still is – a bigger problem than simply having to put up with the inconvenience of a lack of fit. Women working in safety-critical industries having to wear boots designed for men – particularly if those boots are heavy - can be left with a variety of long and short-term health issues.

Other than the size, what else is different about the female foot? 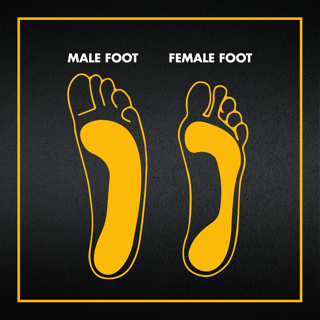 When comparing men and women's feet, there are several significant differences.

Other differences between male and female feet are that women have a shallower big toe, a lower instep and a more curved inside line than men. Women and men even walk differently: women take shorter, more frequent strides relative to height, and they are also more prone to pronating their feet (rolling feet inwards).

What effect does this have on the wearer?

Far beyond the foot

But these are just the short-term foot-health implications. There are a lot of negative effects that the wrong shaped footwear can have on an individual's quality of life over time - and it's a very common occurrence. In fact, when we've visited companies in safety critical industries to carry out fittings, it often turns out that a huge number of people are wearing boots that are ill-fitting or inappropriate. In some cases, it's emerged that up to 90% of the workforce were wearing the wrong size boots.

Poor fitting boots can decrease the stability of the wearer, vastly increasing the chances of slip, trip or a fall, which can pose a range of life and work-limiting issues. Furthermore, when people try to stop overly large shoes slipping from their feet, they will often contract (push down) their toes. Over time, this can lead to a range of musculoskeletal complications.

Finally, regardless of whether someone’s boots are too small or too big, if they are the wrong size and shape, it changes the way they walk. This alteration in gait – often to avoid putting pressure on painful areas or to keep the boot on, leads to an under or overuse of other areas of the body such as the calf, shins and knees. And when the body’s limbs are relied upon in an unnatural way, long term health complications can quickly set in.

Don't just take our word for it

V12 were working with women in safety-specific industries to produce our female range as far back as 2016. And as part of the development process, we wanted to know their challenges regarding safety footwear so we could provide the most effective product to meet the demands of their role. So we asked them to tell us about their experiences of finding and using PPE in their industry. Watch this fascinating and eye-opening series of interviews below:

What does this mean for women wearing safety footwear?

Well, it’s simple. For safety footwear to protect effectively so wearers can do their jobs safely, IT NEEDS TO FIT PROPERLY. And because the female foot is different, female footwear needs be different.

The solution: comfort is just the beginning

“HAVING FOOTWEAR THAT FITS INSTILLS A SENSE OF BELONGING.”

When an organisation provides bespoke PPE to its workforce, it does more than just protect them from physical harm: it shows that all employees – regardless of gender - are valued and respected. And given that lack of appropriate PPE is a significant reason why more women don’t enter safety-critical industries, this seems particularly important. 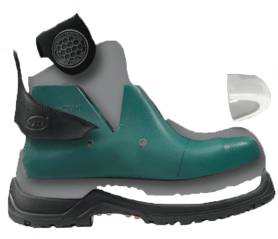 When V12 sponsored INWED (International women In Engineering day) in 2020, we conducted a fascinating interview with Debbie Janson, Senior Lecturer in Mechanical Engineering at Bath University. In it, when asked about PPE for women, she told us:

Watch the full interview below

Taking into consideration the numerous challenges above, we worked alongside the only remaining British lastmaker to design and create a footwear range shaped perfectly for the female foot. Our range provides a comfortable solution that leaves wearers free to focus fully on the job at hand. 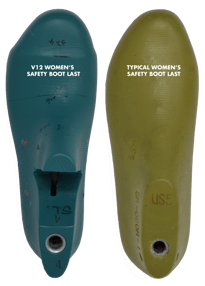 While some female safety boot users happily wear boots designed for men and enjoy the particular safety specifications therein, it's equally true that for many, because of the anatomical difference in feet, this 'one shape fits all'  approach simply doesn't work. Take a look at the image on the right. On the left we have the V12 women's last, while on the right we have a typical manufacturer's last.

You can clearly see a significant difference in the overall shape. Take a closer look. Can you see how the V12 last has been sculpted to accommodate the safety toecap? Can you also see that the shape of the heel on the V12 last is narrower? These are small details. But it’s the small details which make all the difference, not only when it comes to comfort, but most importantly safety.

Trial Not Error – the V12 Foot Health and Safety Solution